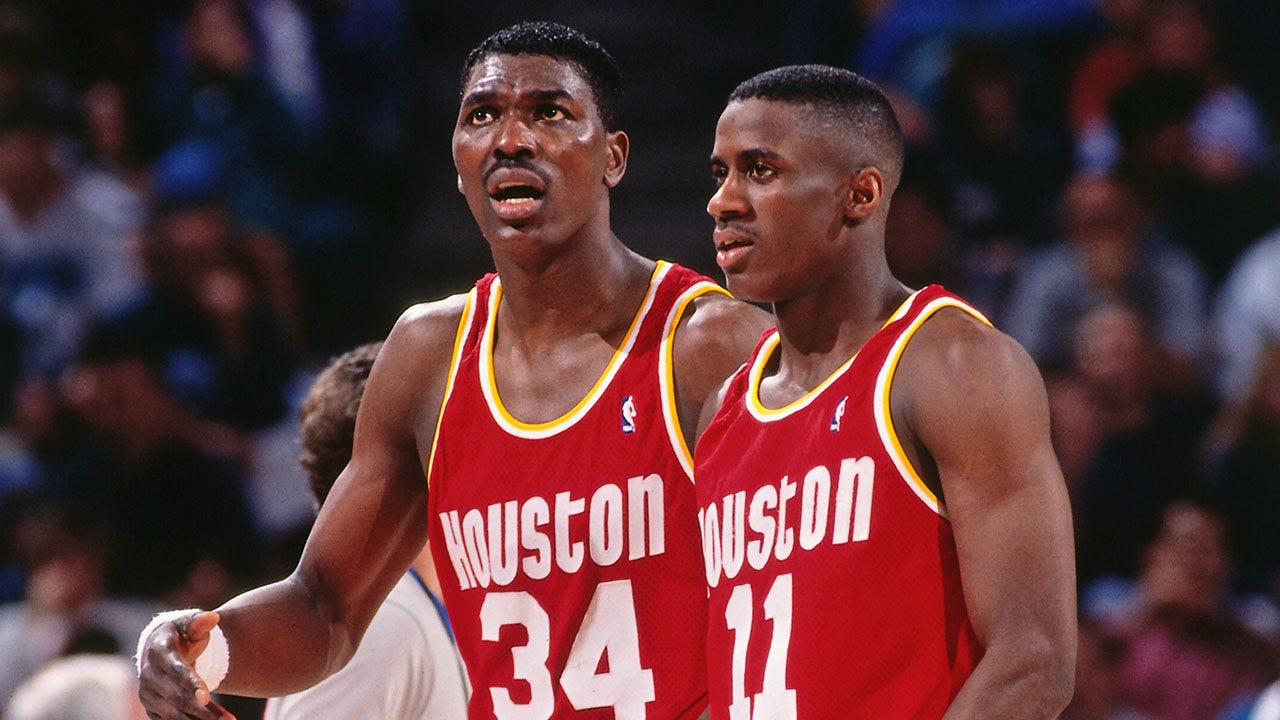 Teammates get into scuffles all the time behind the scenes, but it’s not every day one comes close to becoming a crime scene.

That’s what happened between Hall of Famer Hakeem Olajuwon and former Houston Rockets teammate Vernon Maxwell during a game in Seattle.

Hakeem Olajuwon (34) and Vernon Maxwell (11) of the Houston Rockets during a game against the Sacramento Kings in 1994 at the ARCO Arena in Sacramento, Calif.
(Rocky Widner/NBAE via Getty Images)

Maxwell, who won two rings in Houston during a 12-year NBA career, hopped on Gilbert Arenas’ “No Chill” podcast and recalled his wild encounter with “The Dream” after complaining about his limited role in that game heading to the locker room at halftime.

Olajuwon apparently yelled at Maxwell from behind and then “smacked the s— outta me,” Maxwell recalled.

“That motherf—– hit me so hard, man, knocked me out the chair,” Maxwell said. “I jumped up, grabbed my chair and throwed it at the motherf—–, bust the glass in the locker room.”

Vernon Maxwell, Hakeem Olajuwon and Leslie Alexander pose for a photo during the Houston Rockets Anniversary Luncheon honoring the 1994 and the 1995 championship teams March 19, 2015, at the Toyota Center in Houston.
(Bill Baptist/NBAE via Getty Images)

At that point, Maxwell said police wound up drawing their guns on him in the locker room.

With broken glass all over the place, Maxwell picked up a piece and had a potential weapon in his hands that he says he would have used had it not been for police and everyone fleeing the locker room.

“I was gonna chase Dream and stab the s— outta him,” Maxwell said.

The Houston Rockets’ Hakeem Olajuwon (34) and Vernon Maxwell (11) victorious on the court during a game against the New York Knicks at Madison Square Garden.
(John W. McDonough /Sports Illustrated via Getty Images)

Thankfully, no one was hurt, and Maxwell called Olajuwon a “great teammate.” The pair won back-to-back titles in 1994 and 1995.