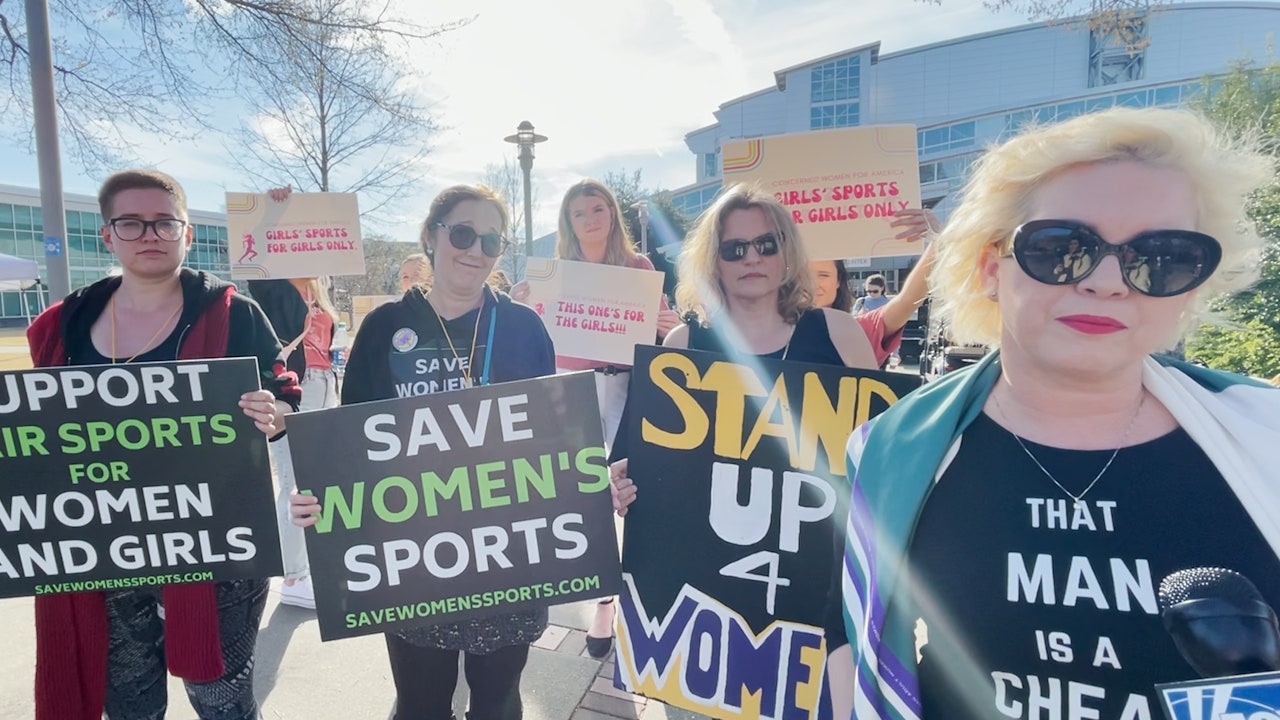 “There’s a man, called Will Thomas, who’s changed his name to Lia Thomas, who is competing in women’s swimming,” Kellie-Jay Keen, head of the organization Standing for Women, said in an interview with Fox News outside the Georgia Tech athletic center where the competition is being held.

“Women aren’t considered full humans,” she continued. “We can’t be – otherwise there wouldn’t be an opportunity for men to compete in women’s sports.”

“Women aren’t considered full humans. We can’t be – otherwise there wouldn’t be an opportunity for men to compete in women’s sports.”

MARTINA NAVRATILOVA: LIA THOMAS WINS SHOULD HAVE AN ‘ASTERISK’

Thomas, 22, of the University of Pennsylvania, won the 500-yard freestyle at the NCAA women’s swimming and diving championships on Thursday, becoming the first transgender athlete to win an NCAA Division I championship in any sport.

The UPenn athlete is also scheduled to swim in the 200-yard and 100-yard freestyle heats this weekend.

Transgender athlete Lia Thomas, left, of the University of Pennsylvania, stands on the podium after winning the 500-yard freestyle as other medalists – from second left, Emma Weyant, Erica Sullivan and Brooke Forde – pose for a photo at the NCAA Division I Women’s Swimming and Diving Championships, March 17, 2022 in Atlanta.
(Getty Images)

“This is a male displacing women,” Annabelle Rutledge, Concerned Women for America director, told Fox News. “The female who came in second today is the real winner.”

“Only women can win a women’s swimming and diving championship,” she continued.

Thomas beat Virginia Cavaliers freshman Emma Weyant by more than one second and Texas Longhorns freshman Erica Sullivan by at least two. Brooke Forde, who won a silver medal at the Summer Olympics in Tokyo last year, raced for the Stanford Cardinal and finished in fourth.

Counter-protesters were also in attendance Thursday to show support for Thomas and Iszac Henig of Yale, another trans-athlete participating in the competition, who will swim in the 50-yard freestyle.

“They’re breaking no rules, right? They’re having to compete at this elite level with the stress of knowing that this is happening outside, and we just want to let them know that we actually really support them,” the trans activist continued.

The NCAA updated its transgender participation policy back in January to defer to the guidance of each sport’s governing body. The NCAA announced that its policy would become effective in March, starting with the Division I Women’s Swimming and Diving Championships.

USA Swimming updated its policy shortly after requiring transgender athletes who are competing at an elite level to have small levels of testosterone — half of what Thomas was allowed to compete with — for at least 36 months before being eligible, but the NCAA said weeks later that the Administrative Subcommittee of the Committee on Competitive Safeguards and Medical Aspects of Sports (CMAS) decided that it wouldn’t alter its testosterone guidance.

“Implementing additional changes at this time could have unfair and potentially detrimental impacts on schools and student-athletes intending to compete in 2022 NCAA women’s swimming championships,” the organization said in a statement.

But Keen of Standing for Women said she opposed the change.

Kafenzakis called out those protesting against Thomas as being disingenuous.

“They’re so frequently using these ‘save women’s sports’ as dog whistle for transphobia,” she said. “They have these simple messages about fairness and competition, but like competition and fairness are not necessarily part of it. I mean, sports are competitive, right? There’s differences in people.”

The groups protesting trans-athlete participation in women’s competitions said they received overwhelmingly positive feedback and encouragement from swimmers and parents attending the event.

“Overwhelmingly, it has been gratitude from the female athletes walking out, as well as many parents and bystanders thanking us, high-fiving us,” Rutledge said.

Keen said that of all the women’s rights protests she has attended, “this one has had more support than I think any I’ve ever been to before.”